I care about things. In the same way Anger does in Inside Out.

This is my fourth LCA, and the third on the trot, thanks in large part to my employer being prepared to stump up funds to send me, which is jolly nice of them. 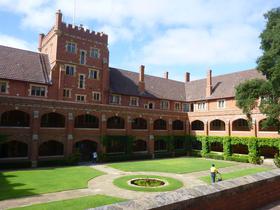 This year was in Perth, at the University of Western Australia. I had two sources of considerable trepidation; one was that I have something of a cold-weather physique, which isn’t really a good match for Perth in early January. The temperature hit 39 degrees on the day I flew in, and 44 on the day I flew out. The heat sucked the air from my lungs.

The second was more specific: having agreed to give a 30 minute talk on systemd, tracking my own reshuffle from blazing hatred to not-quite-unbridled-enthusiasm. Given the controversy surrounding systemd’s adoption, with bitter wrangling across many distributions and harsh words on the Internet it seemed like an inflammatory topic to pick.

To make matters more tense, this year’s sysadmin miniconf proved to be remarkably popular, and the organisers had to peg talk times back, which resulted in a flurry of hacking, practising, restoring, practising, hacking, and ultimately rewriting the whole damn thing the weekend I flew out in an effort to get it both coherant and in the time limit. All the while noting Lennart Poettering would be at the conf.

(In spite of Florian Haas’ last minute attempt to invoke him, Lennart didn’t show up.)

In the end, the talk went really well, which was a relief, and I could get on with enjoying the rest of the conference; as always, there were many, many wonderful presentations, some of which (Katie Miller’s excellent intro to Elixir and Mark Smith’s baby steps with Go simply convinced me I needed to spend my Copious Free Time with extra things to do.

But LCA isn’t just the talks, awesome though they are: it’s also getting a chance to talk to a bunch of really, really smart people who care about some of the same stuff I do, and discover that a bunch of them are nice, friendly folks who are great to hang out with.

There are some pictures of UWA and surrounds, as well as some more ruminations on Perth, here.